Spectroscopy is the study of the interaction (absorption, emission, and scattering) between electromagnetic radiation and matter.

The term “spectroscopy” defines a large number of techniques that use electromagnetic radiation to obtain information about the structure and properties of matter (atoms and molecules).

The electromagnetic radiation is passed onto a sample matter and the response is observed and recorded. A plot of the response as a function of wavelength is referred to as a spectrum.

Spectroscopy is the modern technique which has many merits (advantages) over the classical techniques. 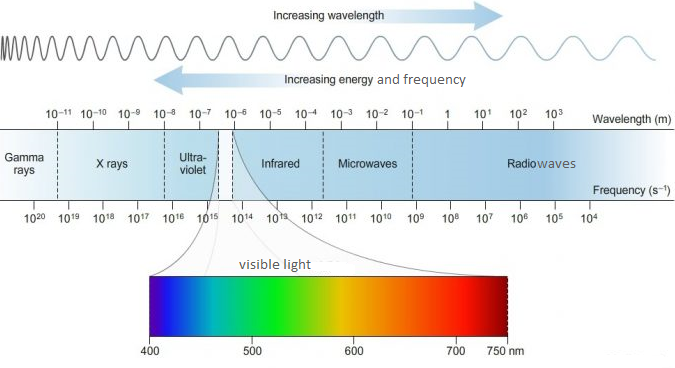 There are many different types of spectroscopy, but the most common types used for chemical analysis are as follows: 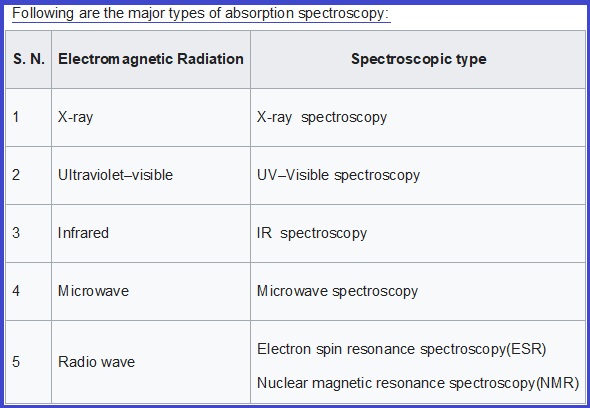 Out of two orientations, the one aligned with applied field is more stable ( i.e. associated with smaller energy) than the one aligned against the applied field (i.e. associated with higher energy). The difference in energy of two orientations is denoted by ∆E. Thus, if we desire to flip the nucleus from lower energy state to higher energy state, an amount of ∆E will have to absorbed by the nucleus.

In organic chemistry, we are more interested in the protons as the nucleus, as hydrogen is constituent of almost every organic compound. The particular branch of NMR spectroscopy where the nucleus is proton is called proton magnetic resonance (PMR) spectroscopy.

A PMR spectrum can be recorded by placing the substance containing hydrogen nucleus in magnetic field of different strength and noting the magnetic field strength at which the absorption of energy corresponding to flipping of proton from lower to higher energy state takes place. 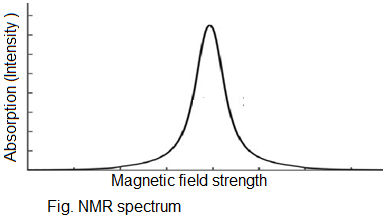 Information that can be obtained from NMR spectrum (spectroscopy):

The following informations regarding structure of the molecule can be obtained from NMR spectroscopy:

From the number of signals, we can tell how many different types of protons are present in the molecule.

Shielding and deshielding of protons:

As a result of shielding and deshielding of protons, there is a shift in the position of the NMR signal as compared with standard substance(i.e. TMS), which is called chemical shift.

The shift in the position of PMR signal compared with a standard substance (i.e. TMS) as a result of shielding and deshielding by electrons is known as chemical shift.

The commonly used scale for expressing the chemical shift is δ-scale(ppm). Tetramethylsilane(TMS) is taken as internal reference. The position of TMS signal is taken as 0 ppm. Next scale is τ and is given as τ=10- δ.

Q) Why do we choose tetramethylsilane i.e. (CH3)4Si as a standard substance for recording chemical shift?

In the first case, the proton ‘b’ experience some increased magnetic field strength and absorb at a lower applied field (downfield).

In the second case, the proton ‘b’ experience some decreased magnetic field strength and absorb at a higher applied field (upfield).

Thus, one peak will be split into two peaks (doublet).

In the first case, the proton ‘a’ experience some increased magnetic field strength and absorb at a lower applied field (downfield).

In the second case, the proton ‘a’ experience some decreased magnetic field strength and absorb at a higher applied field (upfield).

In the third case, the position of the signal will not change.

Thus, one peak will be split into three peaks (triplet).

Each ion has certain m/e ratio i.e. ratio of mass to charge of the ions.

These ions are accelerated by electric field and the ions with particular m/e ratio are detected and recorded by mass spectrometer.

A graph between relative abundance (intensity) and m/e values of the ions is called mass spectrum. 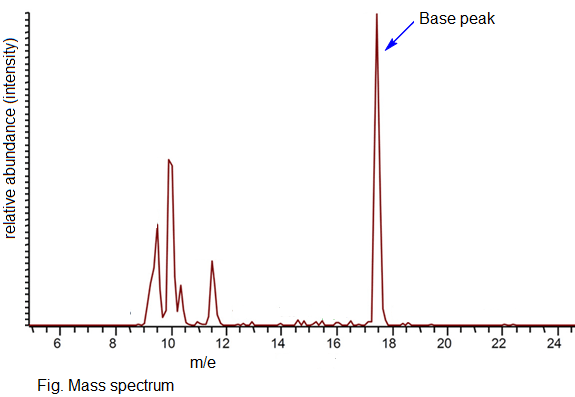 Mass spectrometry is an efficient method to elucidate the chemical composition of a sample or molecule. More recently, it has been used to classify biological products, in particular proteins and protein complexes, in a number of species. Usually, mass spectrometers can be used to classify unknown substances by molecular weight measurement, to measure known compounds, and to determine the structure and chemical properties of molecules. 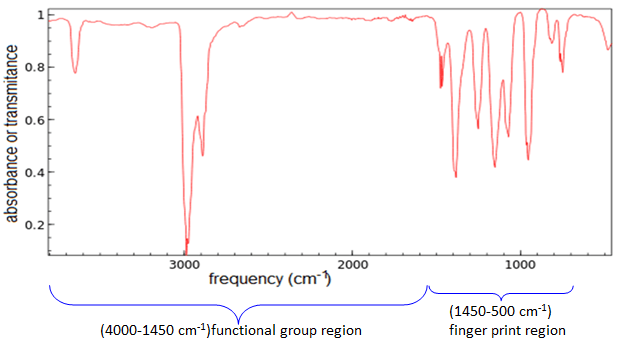 Infrared spectroscopy is widely used in industry as well as in research. It is a simple and reliable technique for measurement, quality control and dynamic measurement. It is also employed in forensic analysis in civil and criminal analysis.

Some of the major applications of IR spectroscopy are as follows:

IR spectroscopy is used to establish whether a given sample of an organic substance is identical with another or not. This is because large number of absorption bands is observed in the IR spectra of organic molecules and the probability that any two compounds will produce identical spectra is almost zero. So if two compounds have identical IR spectra then both of them must be samples of the same substances.

IR spectra of two enatiomeric compound are identical. So IR spectroscopy fails to distinguish between enantiomers.

For example, an IR spectrum of benzaldehyde is observed as follows.

No other compound than benzaldehyde produces same IR spectra as shown above.

3. Studying the progress of the reaction

IR spectrum of the test sample to be determined is compared with the standard compound. If any additional peaks are observed in the IR spectrum, then it is due to impurities present in the compound. 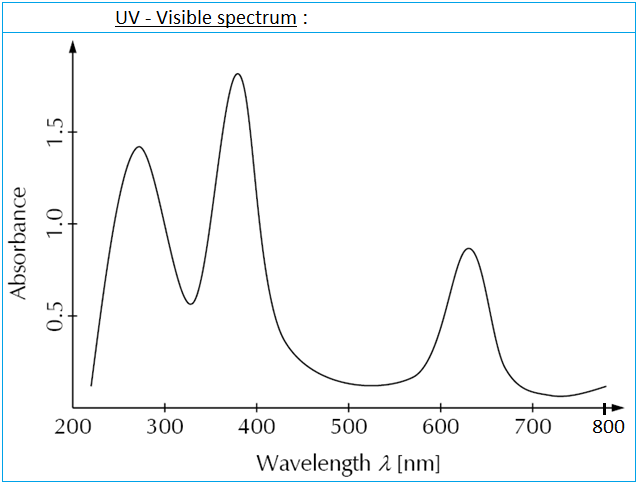 Molecules absorb only such radiations which have appropriate energy to excite the electrons to allowed higher level. The probability of a particular electronic transition has found to depend upon the value of extinction coefficient (€) and certain other factors. According to these factors, transitions can be divided into two categories:
(i) Allowed transitions
(ii) Forbidden transitions

(i) Allowed transitions – These are the transitions having extinction coefficient(€)= 104   or more. π→ π* transitions fulfill these requirements.

For example, in 1,3-butadiene which shows absorption at 217nm has  € value 21000 represents an allowed transition.

For example, transition of saturated aldehydes which shows weak absorption near 290nm has  € value 100 represents a forbidden transition.

Some of the important chromophores are :

It is a group which itself does not act as a chromophore but when attached to a chromophore, it shifts the absorption towards longer wavelength along with an increase in the intensity of absorption.

Some commonly known auxochromic groups are: -OH, -NH2, -OR, -NHR, and –NR2. For example: When the auxochrome –NH2 group is attached to benzene ring, its absorption changes from λmax=225 nm (ɛmax 203) to λmax=280 (εmax1430)
All auxochromes have one or more non-bonding pairs of electrons. If an auxochrome is attached to a chromophore, it helps in extending the conjugation by sharing of non-bonding pair of electrons as shown below.

Shift of an absorption of light towards higher wavelength (lower energy) or towards red portion of spectrum is known as bathochromic shift or red shift.

This effect may be produced by changing the polarity of solvent. It is also produced if two or more chromophores are present in conjugation.

Shift of an absorption of light towards lower wavelength (higher energy) or towards blue portion of spectrum is known as hypsochromic shift or blue shift.

This effect may be produced by the removal of conjugation (auxochrome) or by changing the polarity of solvent.

For example, protonation of aniline causes a blue shift from 280 nm to 203 nm because the aniline ion formed by protonation has no electron pair(i.e. conjugation is removed).