What are haloalkanes ( alkyl halides) ?

Alkyl halides or haloalkanes are the organic compounds in which halogen atom is bonded to an alkyl group. The general formula of these compounds is R – X . 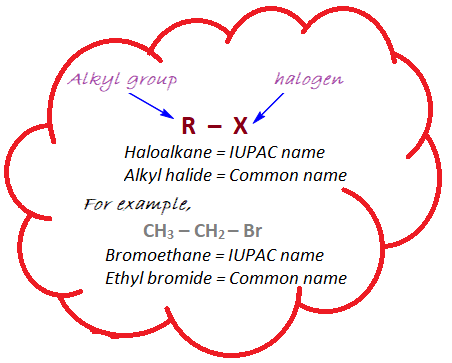 Haloalkanes are classified into primary, secondary and tertiary haloalkanes depending upon the number of carbon atoms to which halogen linked carbon is bonded.

A haloalkane in which halogen linked carbon is bonded to none or one other carbon atom is known as primary haloalkane.

A haloalkane in which halogen linked carbon is further bonded to two other carbon atoms is known as secondary haloalkane.

A haloalkane in which halogen linked carbon is further bonded to three other carbon atoms is known as tertiary haloalkane.

The IUPAC name of any monohalo alkanes is always written as one word.

Organic compounds containing more than one halogen atom in their molecules are known as polyhalogen compounds. Eg. 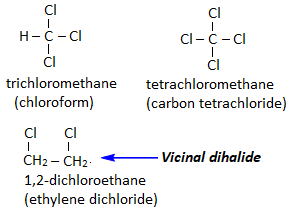 Haloalkanes having 4 or more carbon atoms show isomerism in which isomers differ in the nature of carbon chain. Eg.

Haloalkanes having 3 or more carbon atoms show position isomerism in which isomers differ in the position of halogen atom. Eg.

Q. Write down the possible isomers of molecular formula – (i)C4H9Br (ii)C5H11Br. Give their IUPAC names and also specify them as 10, 20 and 30 haloalkanes.

A. Preparation of haloalkanes from alcohols :

1. By the action of halogen acids :

Alcohols can be converted into haloalkanes by treating it with halogen acids in the presence of dehydrating agent such as anhydrous zinc chloride or conc. H2SO4.

The reactivity of halogen acids follows the order :

# It is because of the fact that bond dissociation energy is : HCl>HBr>HI.

Reactivity of alcohols towards this reaction is :

Note : The mixture of HCl and ZnCl2 is known as “Lucas reagent”.

2. By the action of phosphorus halides :

Alcohols on refluxing with phosphorus penta or trihalides give haloalkane.

3. By the action of thionyl chloride :

Alcohols when refluxed with thionyl chloride in presence of pyridine gives chloroalkane.

Note :  SOBr2 and SOI2 are unstable, therefore bromo and iodo alkanes can not be prepared by this method.

B. Preparation of haloalkanes from hydrocarbons :

When alkene is unsymmetrical then the addition takes place according to Markovnikov’s rule.

This rule states that when an unsymmetrical reagent is added to an unsymmetrical alkene, the negative part of the reagent goes to that double bonded carbon which has lesser number of hydrogen atoms.

It may be noted that peroxide effect or Kharash effect applies to the addition of HBr only and not to the addition of HCl or HI. This is because H – Cl bond is stronger than H – Br bond due to which cleavage of H – Cl bond to give Cl is unfavorable while in case of H – I the bond is cleaved very easily to give I but the I radical formed immediately combine with each other to form I2 rather than forming C – I bond.

This is because with the increase in size and mass of halogen atom, the magnitude of Vander Waal’s force increases and hence boiling point also increases.

Haloalkanes have higher boiling point than alkane of comparable molecular masses. This is because haloalkanes are polar in nature and due to their polarity, a strong dipole-dipole interaction exist between the molecules of haloalkanes.

Although haloalkanes are polar in nature, they are insoluble in water because they are not able to form hydrogen bonds with water molecules. But, they are soluble in organic solvents like benzene, ether, alcohol, etc.

A nucleophilic substitution reaction is a chemical reaction which involves the displacement of leaving group by a nucleophile. In this process, the leaving group i.e. the halogen atom departs along with the bonding pair of electrons and the electrons for the formation of the new bond are furnished (provided/supplied) by the nucleophile.

It is of two types :

When a haloalkane is boiled with aqueous solution of KOH or moist silver oxide (Ag2O), gives alcohol.

2. Substitution by cyano group ( formation of cyanides or nitriles) :

When haloalkane is treated with alcoholic KCN solution it gives alkane nitrile ( or alkyl cyanide) as the major product.

The alkyl cyanide so produced can be used as the starting material for the preparation of a number of other compounds.

Cyanide ion is an ambient nucleophile which has two sites i.e. carbon and nitrogen through which it can attack alkyl halide. KCN is an ionic compound which ionizes to give cyanide ion (CN–), the negative charge of which attacks the alkyl halide to give alkyl cyanide. But AgCN is a covalent compound which does not ionize to give cyanide ion, here the lone pair of electrons present on nitrogen atom attacks alkyl halide to give alkyl isocyanide. Eg.

Alkyl halide when treated with sodium or potassium alkoxide gives ether. This reaction is known as Williamson’s ether synthesis. Eg.

When a mixture of haloalkane and alc. NH3 is heated it gives primary amine. 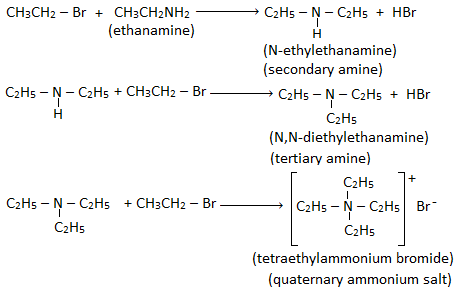 6. Substitution by nitro group (-NO2) : [Formation of nitroalkane]

Q) Haloalkane gives alkyl nitrite with KNO2 while nitroalkane with AgNO2, why?

When two β- carbon atoms are present, then the elimination of H-atom takes place from the β- carbon atom with fewer number of H- atoms i.e. highly substituted alkene is the major product of dehydrohalogenation reaction. Eg.

3. Reaction of haloaklanes with metals

When an alkyl halide( haloalkane) is heated with sodium metal in presence of dry ether, a symmetrical alkane containing double number of carbon atoms than in haloalkane is formed. This reaction is called Wurtz reaction.

Alkyl halide when treated with magnesium in the presence of dry ether gives alkyl magnesium halide which is known as Grignard reagent.

In the presence of sunlight, chloroform is oxidized by air to produce highly poisonous gaseous compound called phosgene (carbonyl chloride).

Thus, chloroform is stored in a dark/coloured bottle to prevent the oxidation of chloroform into phosgene.

A small amount of ethanol is also added into the chloroform at the time of packing because ethanol converts highly poisonous phosgene ( if formed) to a non poisonous diethyl carbonate.

When boiling with aqueous KOH solution, chloroform is hydrolysed to form potassium formate which on acidification gives formic acid.

when chloroform is warmed with a primary amine in the presence of alcoholic KOH, an offensive(unpleasant) smell of carbylamines ( i.e. isocyanide) is obtained. This reaction is known as carbylamine reaction.

When chloroform is heated with phenol and sodium hydroxide followed by hydrolysis, o – hydroxy benzaldehyde ( salicylaldehyde) is formed. This reaction is called Riemer – Tiemann reaction.

Chloroform reacts with acetone in presence of a base such as KOH to give chloretone.

Chloretone is used as a sleep – inducing (hypnotic) drug.

Chloropicrin is used as an insecticide and tear gas.

However, when reduced with zinc and water (i.e. neutral medium) gives acetylene (ethene).

Questions and their Answers

1. Write the importance and limitations of Wurtz reaction.

Importance : Wurtz reaction is used to prepare the higher members of saturated hydrocarbons ( alkanes) from lower member of alkanes. Eg.

Grignard reagent is the alkyl magnesium halide. It is organometallic compound which is represented by the general formula’ RMgX’. Eg.

Preparation : Grignard reagent can be prepared by heating haloalkanes or haloarenes with magnesium in the presence of dry ether.

Therefore, during preparation of Grignard reagent there should not be the presence of water molecules i.e. all the reagents should be anhydrous and apparatus oven dried.

3. Identify P and Q and write their IUPAC name.

5. Identify A and B and write their IUPAC name and reaction involved.

6. Starting from methyl magnesium bromide, how would you prepare methane?

Methane can be prepared by boiling methyl magnesium bromide with water. 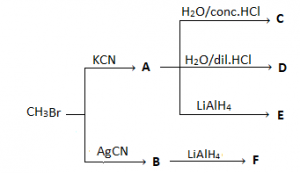 11) Why does chloroform does not give white precipitation with aqueous silver nitrate solution?

→ Chloroform does not give white precipitation with aqueous silver nitrate because C – Cl bond in chloroform is covalent and non – polar and does not ionize in aq. Solution to produce chloride ion (Cl –).

If chloroform is impure, precipitation will occur with aqueous AgNO3 because it may contains HCl as impurities.

12) Write the action of monohydroxy benzene with trichloromethane in presence of alcoholic caustic soda.

13) Identify the products of given reactions. 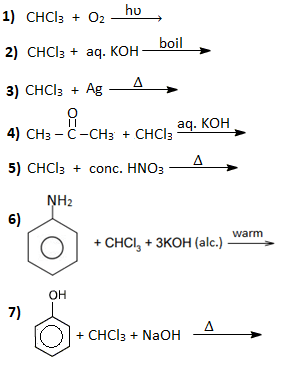 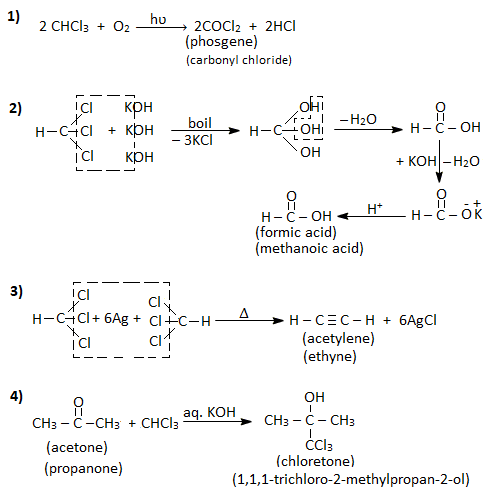 4. A chloro compound ‘A’ on reduction with Zn-Cu couple and alcohol gives the hydrocarbon ‘B’ with five carbon atoms. When ‘A’ is dissolved in ether and treated with sodium 2,2,5,5-tetramethyl hexane is obtained. Write the structure and IUPAC name of ‘A’ and ‘B’.

a. Write down the structural formula of both compounds ‘A’ and ‘B’.

b. Out of these two compounds, which one will be converted to the product with inverted configuration?

7. An organic compound (A) having molecular formula C3H7Cl on reaction with alcoholic solution of KCN gives compound B. The compound B on hydrolysis gives compound C. C on reduction with H2 / Ni gives 1-aminobutane. Identify A, B and C.

8. An organic compound ‘A’ reacts with alcoholic KOH to give ‘B’. ‘B’undergoes ozonolysis and gives two compounds ‘C’ and ‘D’ of molecular formula C3H6O. C and D are functional isomers of each other.

a. Write chemical equation for the conversion of A into C and D.

b. Write the structural formula of C and D. why are they called functional isomers?

c. What happens when hydrogen gas in presence of nickel catalyst is passed over ‘X’.

d. What is the application of ozonolysis in the organic reaction mechanism?

e. How can you prove chemically the compound X is unsaturated?

a. Identify X and Y

b. Write all chemical reactions involved

c. What happens when X is heated with sodium metal in presence of dry ether?

d. How would you distinguish X from propane?

10. An organic compound ‘A’ can be used as an anesthetic gives acetylene when heated with silver powder.

a. Write chemical reaction involved in the preparation ‘A’ from ethanol.

b. What precautions should be followed during the storage of ‘A’? Explain with proper reactions.

c. What happens when ‘A’ is heated with aq.KOH solution?

d. How would you prepare chloretone from ‘A’?

11. Differentiate between SN1 and SN2 reaction.

Write one example of each:

Drugs – Classification of some common drugs.