Formic acid is prepared in the laboratory by the decarboxylation of oxalic acid with glycerol at 1100C.

This reaction occurs in following steps:

Procedure: About 50ml of anhydrous glycerol and 40gm of oxalic acid crystals are placed in a flask and all the apparatus are fitted as shown in figure. The flask is heated at 1100C till the evolution of carbon dioxide (Marked by effervescence) ceases. The reaction flask is then cooled and a fresh lot of oxalic acid (40gm) is added. The mixture is again heated at 1100C and the distilled aqueous solution of formic acid is collected in the receiver. 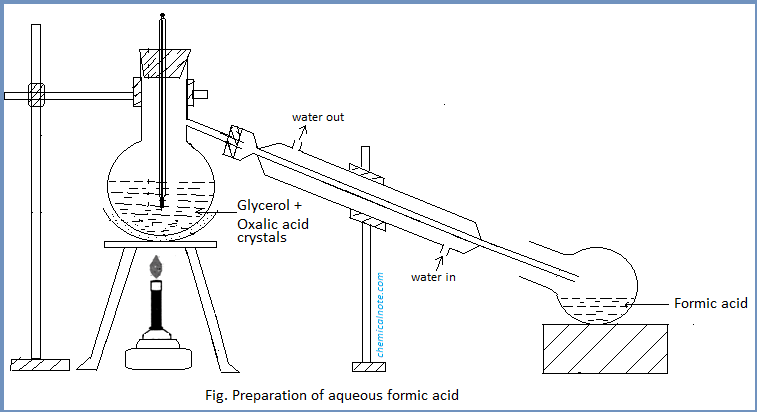 Anhydrous formic acid so obtained contains traces of H2S. it is mixed with some lead formate and is distilled to obtain pure formic acid.

Q) Aqueous formic acid can not be dried by conc. H2SO4, P2O5 and solid KOH, why?

Aqueous formic acid can not be dried by conc. H2SO4, anhy.P2O5 and solid KOH because formic acid itself reacts with these compounds.

In formic acid molecule, the carboxylic acid group is attached to hydrogen atom (not to an alkyl group as in case of other higher members). As a result, it possesses dual functional groups i.e. carboxylic group as well as aldehyde group.

Hence, it behaves as an acid and an aldehyde.

When formic acid is boiled with Tollen’s reagent, a silver mirror is deposited.

When formic acid is warmed with Fehling’s solution, a brick red ppt. of cuprous oxide is obtained.

When formic acid is treated with acidified KMnO4 solution, the pink colour of KMnO4 is discharged.

Formic acid when heated with conc. H2SO4, is dehydrated to form CO and H2O.

No action of conc.H2SO4 on acetic acid.

Acetic acid reacts with PCl5 to give acetyl chloride.