SN2 reaction is also known as bimolecular nucleophilic substitution reaction. Such reactions are generally shown by primary haloalkanes. For example, hydrolysis of ethyl bromide with aq.KOH.

Rate of SN2 reaction depends upon the concentration of both substrate (i.e. alkyl halide) and nucleophile. Thus the reaction follows second order kinetics since both the reactants are present in rate determining step.

Mechanism and Stereochemistry of SN2 reaction: 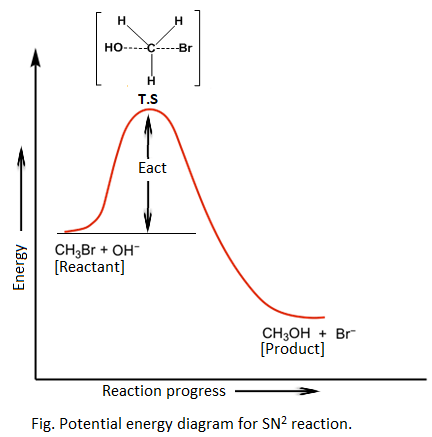 The order of reactivities of alkyl halides towards the SN2 reaction is:

The reaction is faster when the alkyl group of the substance is methyl. When the hydrogen atoms of methyl group are replaced by bulkier alkyl groups, the increased crowding around central atom hinders the attack of nucleophile. This is called steric hindrance. Greater the steric hindrance, slower is the reaction. 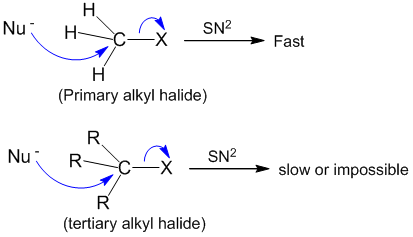 SN1 reaction is also known as unimolecular nucleophilic substitution reaction. Such reaction are generally shown by secondary and tertiary haloalkanes. For example, hydrolysis of tertiary butyl bromide with aq. KOH.

In SN1 reaction, carbocations are formed as the intermediate which are trigonal and planar. Carbocation has a flat structure so that nucleophile can attack it from either side (i.e. front or back) resulting in the formation of two products, one with retention of configuration and other with inversion of configuration. Thus, if the alkyl halide is optically active (i.e. when halogen carrying carbon is chiral), the product would be racemic mixture and optically inactive. However, in actual practice, the product as a whole is not racemic. Usually there is a larger proportion of molecules with inverted configuration than of same configuration.

For example, when (-)-2-bromooctane is hydrolyzed by SN1 reaction, partially racemized product is formed. 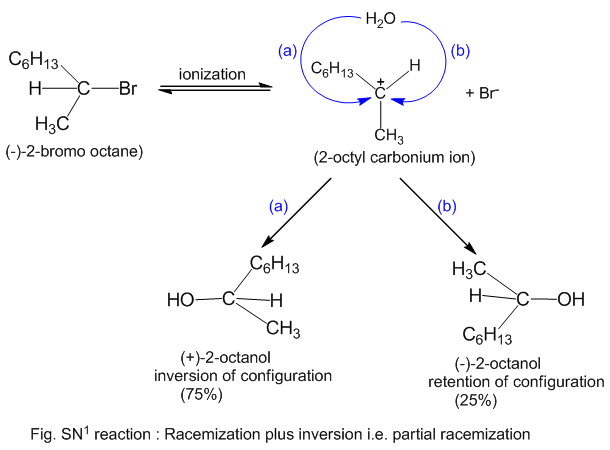 The rate of SN1 reaction depends on the stability of carbocation formed. Therefore, the order of reactivities of alkyl halides towards the SN1 reaction is:

The major differences between SN1 and SN2 reactions are as follows: 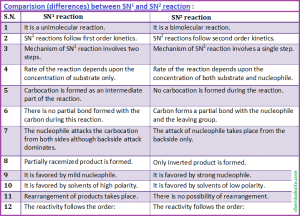