A reaction mechanism is the actual process by which a reaction takes place. It explains which bonds are broken, in what order, how many steps are involved, the relative rate of each step etc.

Depending on how the bonds break, organic mechanisms can be divided into three basic types.

a. Homolytic or free radical mechanism :

If a bond breaks in such a way that each fragment gets one electron , free radicals are formed and such reactions are said to take place by hemolytic or free radical mechanism.

If a bond breaks in such a way that both bonding electrons remain with one fragment, ions are formed and such reactions are said to take place by heterolytic mechanism.

This mechanism involves the cyclic movements of the electrons in the bond breaking and bond making. There are no intermediates, ions or free radicals. Reactions with this type of mechanism are called pericyclic mechanism.

Thermodynamic and kinetic requirements for a reaction

Thermodynamic requirements for a chemical reaction :

To be ∆G negative, there should be decrease in enthalpy and increase in entropy of the system.

For many reactions entropy effects are small and it is the enthalpy that mainly determines whether the reaction can take place spontaneously. However, in certain types of reaction entropy is important and can dominate enthalpy. Some of the examples are:

Kinetic requirements for a chemical reaction :

A negative ΔG is a necessary but not a sufficient condition for a reaction to occur spontaneously. For example, the reaction between H2 and O2 to give H2O has a large negative ΔG, but mixtures of H2 and O2 can be kept at room temperature for many centuries without reacting to any significant extent.

So, for a reaction to occur, the chemical reactions require some activation energy. Activation energy is defined as the minimum amount of extra energy required by a reacting molecule to get converted into product. It can also be described as the minimum amount of energy needed to activate or energize molecules or atoms so that they can undergo a chemical reaction or transformation. 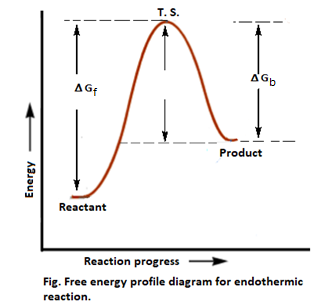 Let us consider a chemical reaction in which a reactant ‘A’ gives two different products ‘B’ and ‘C’ by different mechanism. 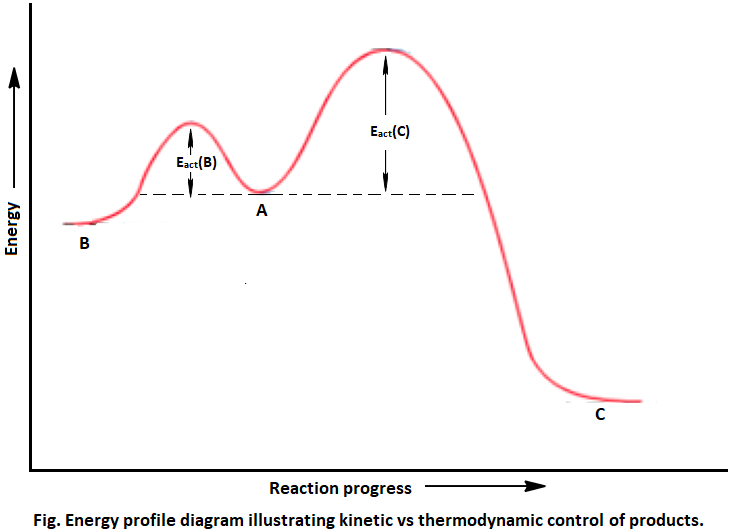 If the reaction is irreversible, energy of activation is lower for the formation of B, so B is formed faster. So, the product ‘ B’ is said to be kinetically controlled.

Example of kinetic and thermodynamic control of the reaction :

Q) Explain the term kinetic and thermodynamic control of the reaction with suitable examples.

The kinetic and thermodynamic control of the reaction can be understood by taking an example of addition of HBr to 1,3-butadiene.

Q) Give the statement of Hammond postulate. Why is it most useful ?

Transition states have zero life time, so it can not be isolated and studied directly and hence the information about their shape and geometries must be obtained from inference. Hammond postulate states that ‘ for any single reaction step, the geometry of the transition state for that step resembles to the compound (reactants or products) to which it is closer in free energy’.

Hammond postulate is most useful in dealing with reactions with intermediates. For the reaction illustrated in energy profile diagram as below: 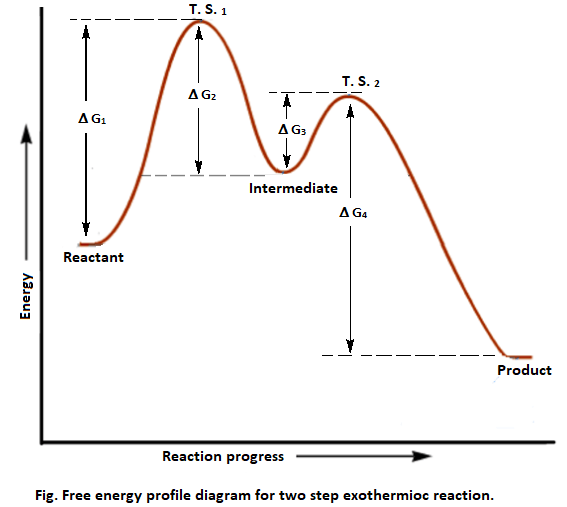 Difference between transition states and intermediates :

The transition state refers to an imaginary molecule having zero life time and cannot be isolated. In this state the system possesses maximum energy and is most unstable. It is impossible to observe them directly and information about their geometries must be obtained from inference.

On the other hand, the relatively stable products formed from the reactants during reaction that further reacts to give the final product is called intermediate. The energy of intermediate is less than that of transition state and can be isolated and studied. Their geometries can be obtained by using many techniques such as IR, NMR spectroscopy, etc. We often use the knowledge of intermediates to determine the shape and geometry of transition states.

Q) State Hammond postulate. What information does the postulate provides about the structure of T.S. in the following energy profile diagram ?

Under the same reaction condition, if the reaction is reversible, the forward and reverse reactions must proceed by same mechanism. This is called the principle of microscopic reversibility. For example, if in a reaction A → B there is an intermediate ‘C’, then ‘C’ must also be an intermediate in the reaction B → A.

This is a very useful principle to predict the mechanism of reversible reaction.

There are a number of commonly used methods for determining reaction mechanism. In most cases, one method is not sufficient. Reaction intermediates are the important class of chemical species, which are quite helpful in understanding the mechanism of a chemical reaction.

Isolation of intermediates gives the valuable information to identify the exact mechanism. It is sometimes possible to isolate an intermediate from a reaction mixture by stopping the reaction after a short time or by the use of very mild conditions. For example, Hoffmann’s bromamide reaction:

During this reaction following intermediates were formed and isolated:

In order to explain the formation of these intermediates, following mechanism was proposed:

If the products of a reaction are capable of existing in more than one stereoisomeric forms, the form which is obtained may give information about the mechanism. For example, in SN2 reaction the product product obtained is always inverted. This is only possible if the attack of nucleophile and removal of leaving group takes place simultaneously. In such cases, nucleophile attacks from backside of leaving group to give inverted product.

Identification of the products of a reaction also helps to define the reaction mechanism.

For example, elimination reaction of 2-bromobutane.

From the identification of but-2-ene as major product and bu-1-ene as minor product, following mechanism can be proposed:

Q) What is the scope of isotope labeling (tracer technique) in the determination of reaction mechanism? Explain with suitable example.

Much important information can be obtained by using molecules that have isotopically labeled and tracing the path of the reaction in that way.

For example, ester undergoes hydrolysis to form a mixture of carboxylic acid and alcohol.

In this reaction, the appearance of O18 in carboxylic acid has been confirmed by mass spectroscopy. So the fission must have occurred at acyl-oxygen bond in the hydrolysis of ester.

In some cases, the suspected intermediate is known to be one that reacts in a given way with a certain compound. The intermediate can then be trapped by running the reaction in the presence of that compound.

For example, benzyne reacts with dienes in Diels- Alder reaction. In any reaction where a benzyne is suspected intermediate, the addition of a diene and the detection of Diels-Alder addition product indicates that the benzyne was present.

Q) The action of p-chlorotoluene with sodamide in presence of liquid ammonia yields a mixture of para and meta toluidene. Give the mechanism of the reaction.

Q) Using the method of trapping intermediate, predict the suitable mechanism for the following reaction:

The mechanism of this reaction is believed to proceed as follows by trapping benzyne intermediate.

Step – I : The first step involves the loss of H+ and Cl- from p-chlorotoluene to form a benzyne intermediate.

Step – II : The second step involves the attack of the benzyne intermediate by NH2– followed by protonation. 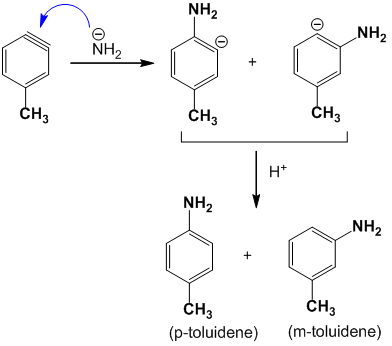 The hybridization of carbon atom (C) undergoing the ring closure reaction is of three types :

The following are Baldwin’s rule for closing rings of 3 to 7 members:

Disfavored does not mean it cannot occur but only it is more difficult than the favored cases. A reaction that is disfavored (slow) does not have a rate that is able to compete effectively with an alternative reaction that is favored (fast). 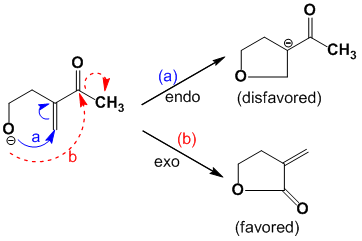