Depending upon the number of –OH groups present in the molecule, alcohols can be classified as :

Monohydric alcohols are further classified as primary, secondary and tertiary alcohols according to the nature of – OH bonded carbon atom.

Alcohols in which – OH bonded carbon atom is further bonded with one or none other carbon atom are called primary alcohols. Eg.

Alcohols in which – OH bonded carbon atom is further bonded with two other carbon atoms are called secondary alcohols. Eg.

Alcohols in which – OH bonded carbon atom is further bonded with three other carbon atom are called primary alcohols. Eg. 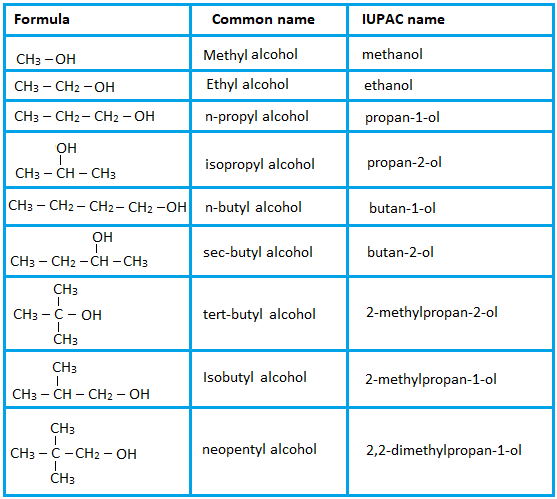 Q) Write down the possible isomeric alcohols of molecular formula- (a)C4H10O (b)C5H12O. Write their IUPAC name and also classify them as 10, 20 and 30 alcohols. 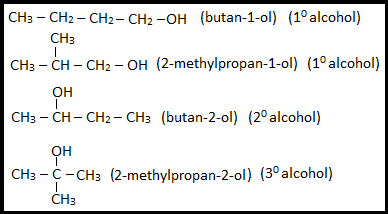 General methods of preparation of alcohols

1. By hydrolysis of haloalkanes :

Alcohols are produced when haloalkanes( alkyl halides ) are treated with aqueous sodium or potassium hydroxide.

2. From aldehydes and ketones:

i. By reduction: Aldehydes and ketones on reduction with (i)H2/Ni or Pt or Pd (ii)LiAlH4 (iii)Na/C2H5OH give corresponding alcohols.

Aldehydes give primary alcohols while ketones give secondary alcohols. 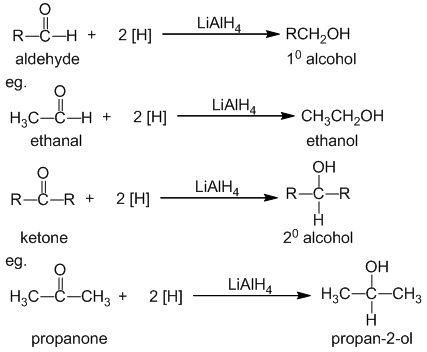 b. Aldehydes other than formaldehyde give secondary alcohol. Eg.

3. From ether (By hydrolysis): Ethers on hydrolysis in the presence of dil.H2SO4 under high pressure gives alcohol.

4. By reduction of carboxylic acids and esters:

Carboxylic acids and esters on reduction with LiAlH4 or Na/ethanol give alcohols. 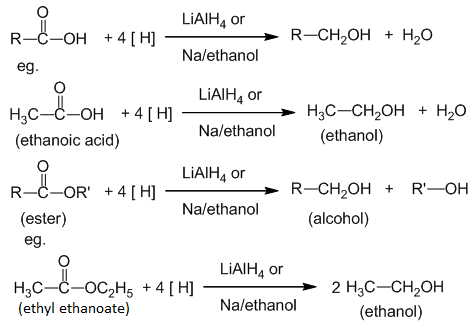 5. By hydrolysis of esters:

Esters on hydrolysis in presence of dilute mineral acid or alkali give alcohols. 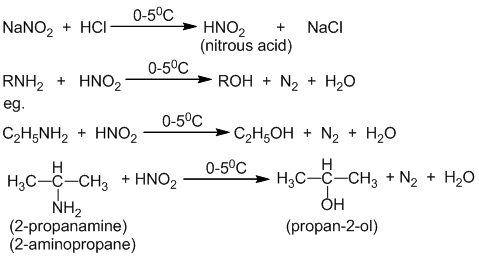 1. By hydration of alkenes:

a. By direct addition of water: Alkene can be converted into alcoholby direct hydration in the presence of phosphoric acid (H3PO4) or sulphuric acid (H2SO4) as catalyst. The addition of H2O to alkene takes place according to Markovnikov’s rule.

b. By indirect addition of water: Alkenes when treated with conc. H2SO4 and the product is hydrolysed with water, alcohols are produced.

Alkenes react with carbon monoxide and hydrogen in the presence of cobalt carbonyl catalyst [Co(CO)4]2 at high pressure and temperature to give aldehyde, which on catalytic hydrogenation gives primary alcohol. Eg.

Fermentation is a biochemical process of degradation (slow decomposition/ breaking down) of large organic molecules like sugars and starches into simpler compounds by the catalytic action of enzymes.

a. Ethanol from sugar (eg. molasses) : Molasses is the dark coloured liquid left after crystallization of sugar from sugarcane juice.

Enzymes invertase and zymase are obtained from yeast. The reactions occurring during the fermentation of sugar are:

b. Ethanol from starch: Ethanol can also be obtained from starchy materials like rice, maize, barley, millate, etc. with enzymes diastase, maltase and invertase. 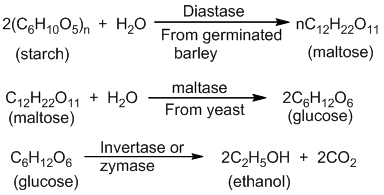 1. Physical state: The lower members of alcohols (upto C12 are colourless liquid having characteristics alcoholic odour and burning taste. The higher members (above C12) are colourless, odourless and waxy solids.

2. Solubility : The lower members of alcohols are highly soluble in water mainly due to the formation of intermolecular hydrogen bonding as shown below:

But the solubility of alcohols decreases with the increase in the length of carbon chain due to increasing hydrophobic nature of alkyl chain which resists the formation of H-bond with water molecules. i.e.

3. Melting and boiling point : The m.pt. and b.pt. of alcohos are higher than the corresponding alkanes and alkyl halides due to intermolecular H-bonding between alcohol molecules.

Therefore, m.pt. and b.pt. is directly proportional to the molecular weight and surface area.

The reactions of alcohols can be grouped into the following categories:

A. Reactions involving the cleavage of O – H bond:

In this reaction, alcohol acts as a (weak) acid. The acidic nature is mainly due to the presence of the highly polar O – H bond, which allows the separatipon of hydrogen atom (hydrogen as H+ ion).

The acidic nature of alcohols shows the order:

The alkyl group is an electron releasing group, which releases electrons toward O-atom thereby increasing the electron density at O-atom. As a result, O-atom shows lesser tendency to withdraw electrons from H-atom. This decreases the polarity of O – H bond due to which breaking of O – H bond becomes difficult. Thus, acidic nature decreases with the increase in alkyl group.

Q) Alcohols are weaker acid than water, why?

Although water and alcohols have similar structure, -OH group is attached to a H-atom in water while in alcohols-OH group is bonded to an alkyl group.

The alkyl group is an electron releasing group, which releases electrons toward O-atom thereby increasing the electron density at O-atom. As a result, O-atom shows lesser tendency to withdraw electrons from H-atom. This decreases the polarity of O – H bond due to which breaking of O – H bond becomes difficult. Thus, acidic nature decreases with the increase in alkyl group.

Alcohols react with carboxylic acids in the presence of few drops of conc. H2SO4 to form esters. This reaction is known as esterification reaction.

When alcohols are heated with an acid chloride or acid anhydride, esters are formed. Eg.

B. Reactions involving the cleavage of C – OH bond:

The –OH group of alcohol has two lone pair of electrons on O-atom and thus behave as Lewis base. The Lewis base nature of alcohols show the order:

In tertiary alcohols the partial –ve charge on oxygen atom is intensified due to +I effect of alkyl group. This increases the tendency of oxygen atom to donate electron pair or to show the cleavage og C-O bond. 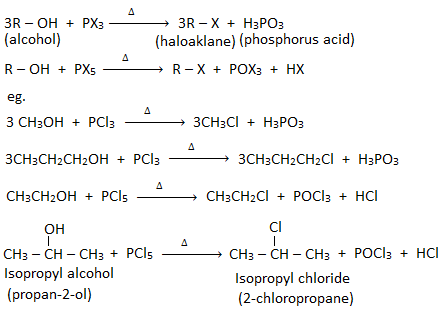 When alcohol is heated with conc. H2SO4 or when vapour of alcohol is passed over heated alumina (Al2O3), it undergoes dehydration to give alkenes or ethers. The nature of product depends upon the reaction conditions.

When alcohol vapours are passed over heated copper at 3000C, different types of alcohols give different products.

a. Primary alcohols are dehydrogenated to aldehydes. Eg.

b. Secondary alcohols are dehydrogenated to ketones. Eg.

c. Tertiary alcohols doesn’t get dehydrogenated due to the absence of α-hydrogen but it undergoes dehydration to give alkene.

Identification of primary, secondary and tertiary alcohol by oxidation method :

i. Primary alcohols are easily oxidized first to aldehyde and then to carboxylic acids containing same number of C- atoms as in parent alcohol. Eg.

iii. Tertiary alcohols do not contain hydrogen atom on the carbon carrying – OH group (i.e. α- hydrogen). Thus in order to oxidize tertiary alcohol, a carbon-carbon bond must be broken. For this reason 30 alcohol do not undergo oxidation reaction in neutral or alkaline medium.

But if the oxidation is carried out in the acidic medium under drastic condition tertiary alcohol oxidize to give a mixture of ketone and carboxylic acid. The ketone thus formed further gets oxidized to carboxylic acid.

In Victor Meyer’s method, alcohol is first treated with P and I2 to get iodoalkane , which is then treated with AgNO2 ( silver nitrate) to get nitroalkane. The nitroalkane thus obtained is treated with nitrous acid ( a mixture of NaNO2 and dil. HCl) and the resulting solution is finally made alkaline with KOH and the colour is observed. If the colour obtained is : 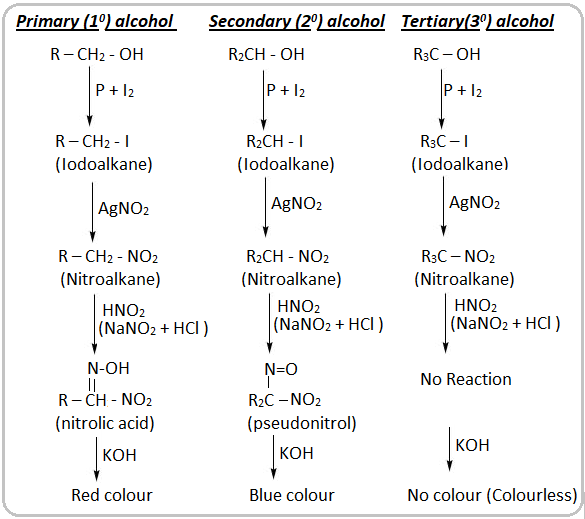 Q. How would you distinguish ethanol and propan-2- ol using Victor Meyer’s method?

→ Ethanol is a primary alcohol while propan-2-ol is a secondary alcohol.

In Victor Meyer’s method, alcohol is first treated with P and I2 to get iodoalkane , which is then treated with AgNO2 ( silver nitrate) to get nitroalkane. The nitroalkane thus obtained is treated with nitrous acid ( a mixture of NaNO2 and dil. HCl) and the resulting solution is finally made alkaline with KOH and the colour is observed. If the colour obtained is : 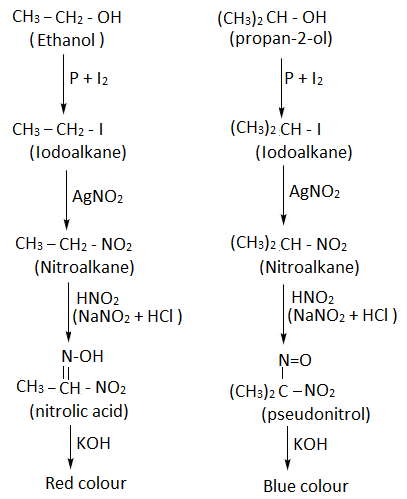 See the note of Lucas test and Victor-Meyer’s method

1. Write the structural formula of isomeric alcohols of molecular formula C3H8 How would you prepare these isomers using CH3MgBr? Also arrange these isomers in decreasing order of their boiling points.

2. An organic compound ‘A’ reacts with sodium metal to give hydrogen gas. The compound ‘A’ on treatment with hot conc. H2SO4 give ‘B’ which on ozonolysis yields propanone and ethanal. Identify compound ‘A’ and ‘B’ giving concerned reaction.

3. Write down the isomeric alcohols of C3H8O and their IUPAC name.

a. Explain Victor-Meyer’s method method to distinguish them.

b. Which one of these isomers gives the iodoform test? Write the reaction involved.

c. How do you convert one isomer into another? Write the chemical reaction.

4. An alcohol A (C4H10O) on oxidation with acidified potassium dichromate gives carboxylic acid B(C4H8O2). Compound A when dehydrated with conc. H2SO4 at 443K gives compound C. Treatment of C with aqueous H2SO4 gives compound D(C4H10O) which is an isomer of A. Compound D is resistant to oxidation but compound A can be easily oxidised. Identify A,B, C and D and write their structures.

5. An organic compound A (C2H3N)is used as a solvent of choice for many organic reactions because it is not reactive in mild acidic and basic conditions. Compound A on treatment with Ni/H2 forms B. When B is treated with nitrous acid at 273 K, ethanol is obtained. When B is warmed with chloroform and NaOH, a foul smelling compound C is formed. Identify A, B and C.

7. An organic compound A having molecular formula CH2CN on reduction give another compound B. B on treatment with HNO2 give ethyl alcohol and on warming with CHCl3 and KOH (alcoholic) gave an offensive smelling substance C. Identify A,B and C. Write down the equation involved.

8. An optically inactive compound (A) having molecular formula C4H11N on treatment with HN02 gave an alcohol, (B). (B) on heating with excess of conc. H2SO4 At 440K gave an alkene (C) . (C) on treatment with HBr gave an optically active compound (D) having molecular formula C4H9Br . Identify A,B,C and D and write down their structural formulae. Also write the equation involved.

9. An organic compound ‘A’ having molecular mass 46 on heating with iodine in presence of aq. NaOH gave compound ‘B’. The compound ‘B’ reacts with heated silver gives ethyne. Identify ‘A’ and ‘B’.

11. An alkene ‘A’ while performing Baeyer’s test was found to give a dihydric alcohol ‘B’. ‘B’ undergoes stepwise oxidation with K2Cr2O7/H+ to give a dicarboxylic acid C2H2O4 ‘B’ as the final product. Identify ‘A’ and ‘B’.

12. A primary alcohol ‘X’ with molecular weight 46 is boiled with sodium hydroxide and iodine. When the same alcohol is heated with ethanoic acid in presence of conc. H2SO4, one of the derivatives of carboxylic acid ‘Y’ is obtained.

a. Write the reaction involved in both conditions.

b. What would be the product obtained when ‘X’ is heated with conc. H2SO4.

c. How would you distinguish above alcohol from methanol?

e. How would you prepare ‘X’ from starch?

g. What is the role of H2SO4 in this reaction?

What happens when [Write reaction]: