What is IUPAC nomenclature?

This is a method of naming the organic compounds as recommended by the international Union of Pure and Applied Chemistry (IUPAC).

Each part of the IUPAC name gives you some useful information about the compound.

Before starting the IUPAC rules, lets see an example of organic compound and it’s IUPAC name. 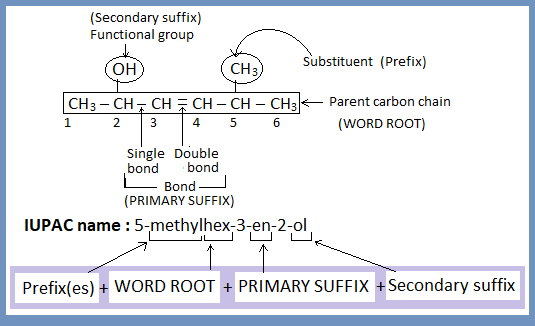 ‘methyl’ tells that –CH3 is present as substituent.

‘hex’ tells that there are 6 carbon atoms on parent carbon chain.

‘en’ tells that there is at least one carbon to carbon double bond.

‘ol’ tells that there is –OH group(alcohol) as functional group.

Thus, general format for IUPAC name of all compounds is:

1. Word root : It indicates the parent carbon chain, which is the the longest continuous chain of carbon atoms including functional group and multiple bonds( if present).

2. Primary suffix : It indicates the nature of carbon to carbon bond in the parent carbon chain.

3. Secondary suffix : It indicates the parent(main) functional group present in the compound.

{Note: -NH2 can be taken as substituent as well as functional group}

Naming of all organic compounds can be done in three steps as, 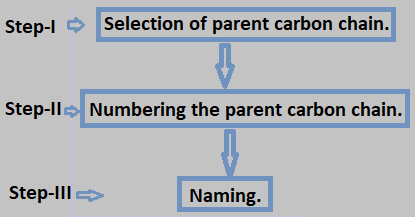 To simplify the nomenclature process, differentiate the organic compounds in four categories as,

[A] Compounds containing carbon to carbon single bonds and substituents only.

IUPAC Nomenclature of organic compounds containing carbon to carbon single bonds and substituents only : [A]

There are only three steps in nomenclature of all organic compounds.

If two or more equally long chains are present, the chain with maximum number of substituent is selected as the parent chain.

Lowest locant rule: Carbon bearing the substituent gets the lowest possible locant. Locant is a number that locate the position of substituent.

If substituents are present at equivalent position, follow alphabetical order.

Step III – Naming : Alphabetically i.e. if more than one substituents are present then they are written in the alphabetical order.

Step-I : Selection of parent chain : The longest continuous carbon chain including multiple bond is selected as the parent chain. Eg.

If both substituent and multiple bond are present, the priority order is:

Step III – Naming : Alphabetically i.e. if more than one substituents and multiple bonds are present then they are written in the alphabetical order.

Note: If both double and triple bonds are present, the terminal ‘e’ of first one(in name) is dropped(removed).

Step-I : Selection of parent chain : The longest continuous carbon chain including functional group is selected as the parent chain. Eg.

Step-II : Numbering the parent chain : Now the final priority order for numbering is :

Some examples of IUPAC names for compounds containing one functional group:

The priority order of functional groups is:

At first, principal functional group is identified according to priority order. Eg.

Some other examples of polyfunctional compounds :