What is ozone and ozone layer?

Ozone is a tri-atomic molecule of oxygen having molecular formula O3 and molecular weight 48.

There is a layer of ozone in the atmosphere from 12 to 24 km from the surface of the earth. Ozone is formed naturally in the stratosphere by the action of ultraviolet radiation from the sun on oxygen.

Preparation of ozone from oxygen

Ozone is prepared by passing silent electric discharge through pure and dry oxygen in an apparatus called ozonizer. The produced gas is called ozonized oxygen that contains 10-15% ozone.

Experimental evidences (like electron diffraction, microwave studies) indicate that ozone molecule is angular with bond angle 11604’’. The bond lengths are equal (1.279 Å ). This indicates ozone molecule is resonance hybrid of structure (I) and (II).

Ozone hole means a severe depletion of ozone in the region of ozone layer through which UV rays from the sun can penetrate to the earth causing devastating effects. 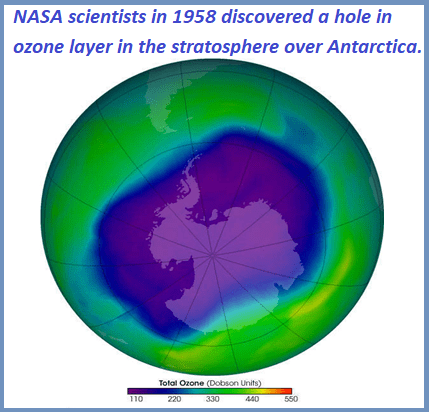 The main causes responsible for ozone layer depletion are as follows:

The main cause of ozone layer depletion is manmade chlorofluorocarbons (CFCs). CFCs also known as Freons are compounds containing chlorine, fluorine and carbons. They are extensively used by human beings as coolants in refrigerator, air conditioner etc.

Because of high stability, freons remain in the environment for a long time and reaches to the stratosphere. In stratosphere, CFCs absorbs UV light and decomposes to give chlorine atom which destroys the ozone molecules by chain reaction as follows:

It is estimated that one molecule of CFC can destroy 100,000 molecules of ozone. Therefore, the use of CFC’S is banned nowadays.

Researchers say that the unregulated launching of rockets and nuclear tests result in much more depletion of ozone layer than the CFCs do. If not controlled, this might result in a huge loss of the ozone layer.

The nitrogenous compounds such as NO2, NO, N2O are highly responsible for the depletion of the ozone layer.

The ozone layer has been found to be depleted by certain natural processes such as stratospheric winds. But it does not cause more than 1-2% of the ozone layer depletion.

The volcanic eruptions are also responsible for the depletion of the ozone layer.

Some points that would help to prevent ozone layer depletion are as follows:

These two reactions can help to identify ozone:

When mercury comes in contact with ozone, ozone oxidizes mercury to mercurous oxide. The meniscus of mercury is lowered and it leaves a tail when allowed to fall through an inclined surface. This property of mercury is called tailing of mercury.

Action with KI and starch :

When ozone is passed into the solution of KI and starch, ozone oxidizes KI to iodine and iodine gives blue colour with starch.

These reactions can be used for the test of ozone.

3. Ozone is in high concentration in :

4. Tailing of mercury is caused by :

5. One molecule of chlorofluorocarbons can destroy upto ____ molecules of ozone.

6. Montreal protocol is related to the:

7. Which of the following is known as freon?

Allotropes and Allotropy – Allotropes of Carbon, Sulphur and Phosphorus