Organic compounds are defined as the hydrocarbons (compounds containing carbon and hydrogen) and their derivatives in which covalently bonded carbon is an essential constituent.

Organic compounds are classified as :

Organic compounds in which the terminal C-atoms are not joined together are called open chain compounds. Eg.

The open chain organic compounds can be further classified as,

Alkanes : Alkanes are the saturated hydrocarbons with general formula CnH2n+2. They contain only carbon-carbon and carbon-hydrogen single bonds in their molecules. For example:

Note : Alkanes are called saturated because all the possible sites (i.e. 4) are bonded with other atoms.

But in alkenes and alkynes there is a possibility of addition of atoms or groups so they are called unsaturated.

Alkenes : Alkenes are unsaturated hydrocarbons with general formula CnH2n. They contain at least one carbon to carbon double bond in their molecules. For example:

Alkynes : Alkynes are unsaturated hydrocarbons with general formula CnH2n-2. They contain at least one carbon to carbon triple bond in their molecules. For example:

Organic compounds in which the terminal carbons are joined together to form a cyclic structure are called closed chain or cyclic organic compounds. For exampne:

Homocyclic compounds can be further classified as – Alicyclic and Aromatic compounds. 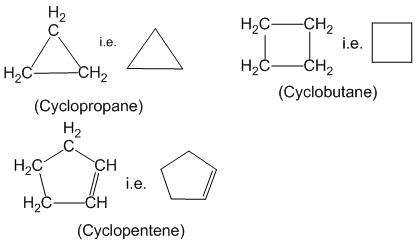 Benzene and those cyclic compounds that chemically behave as benzene are called aromatic compounds. For example:

Huckel’s rule states that a cyclic and planar molecule is aromatic if it contains 4n+2 delocalized π electrons, where n = 0,1,2,3,4,etc.

Benzene is cyclic and planar and has cyclic overlap of p-orbitals. There are 3 double bonds i.e. 6 delocalized π – electrons, which is consistant with Huckel’s rule.

Therefore, benzene is an aromatic compound. It will show aromaticity.

Cyclic organic compounds in which at least one heteroatom (i.e. atom other than carbon eg. N, O or S ) is present as one of the ring forming atoms are called heterocyclic compounds. Examples :

It represents actual number of atoms of all the elements present in one molecule of the compound. For example:

It represents simple whole number ratio of atoms of all the elements in one molecule of the compound. For example:

• Electron-dot formula : In this formula valence electrons are represented by dots placed around the chemical symbol. It is also called Lewis formula. For example:

• Structural formula : It indicates how the atoms are bonded in a molecule of the compound. For example:

It is the structural formula in contracted form to save space and time. 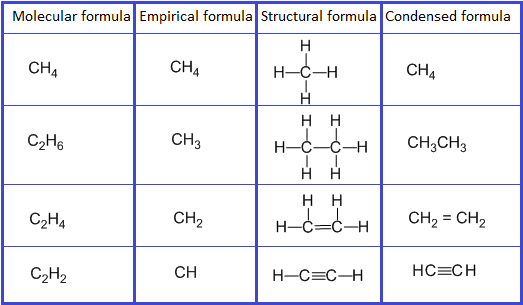 In this type of formula, carbon and hydrogen atoms are not shown and only hetero atoms are shown. The point of intersection represents carbon along with required number of hydrogen to satisfy the valency of carbon. For example:

This formula represents the three dimensional shape or arrangement of atoms in the molecule. For example :

For example: organic compounds having – OH as functional group constitutes a class of compounds called alcohol.

Some other examples of functional group are : 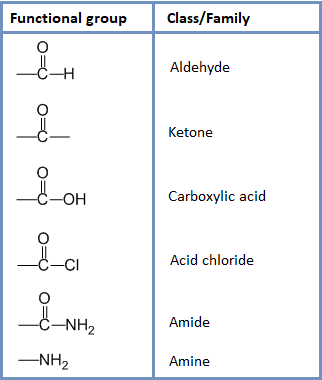 The series of organic compounds having same general formula and similar chemical properties but different physical properties in which one member differs from other member by single – CH2 unit is known as homologous series. For example:

2. The formula which represents the simple whole number ratio of different atoms present in one molecule of a compound is known as :

3. An organic compound has empirical formula CH2O and molecular weight 90. It’s molecular formula will be :

4. General formula of an alkene is :

6. If two compounds have same empirical formula but different molecular formula, they must have :

7. Which of the following is an aromatic compound :

8. Which of the following is a heterocyclic aromatic compound :

9. Which of the following belongs to a homologous series ?

10. Which of the following is not true about homologous series ?

a. Adjacent members of group differ by one –CH2 group.

b. Adjacent members of group differs by a mass of 14 amu.

c. Members of a group have same chemical and physical properties.

d. Members of a group can be prepared by same general methods.