Development of polarity in between the two covalently bonded atoms due to the difference in electronegativity is called inductive effect. This effect is also called field effect or space phenomenon.

The inductive effect decreases on increasing the distance.

Inductive effect may be represented by arrow in the middle of the bond towards electron withdrawing atom or group.

If an atom or group of atoms withdraws electrons, the effect shown by such group is called negative inductive effect (- I effect). Such atoms or groups are more electronegative than carbon atom and also called electron withdrawing species. Some common atoms or groups which cause – I effect are:

If an atom or group of atoms releases electrons, the effect shown by such group is called positive inductive effect (+ I effect). Such atoms or groups are more electropositive than carbon atom and also called electron releasing species. Some common atoms or groups which cause + I effect are:

Q. Formic acid is stronger acid than acetic acid, why?

Electron donating inductive effect ( +I effect) of alkyl group increases the electron density on O – H bond making the release of H+ ion difficult. So the acidic nature increases with the increase in +I effect of alkyl group. Hence, formic acid is stronger acid than acetic acid.

Q. Why is chloroacetic acid stronger than acetic acid?

Electron withdrawing inductive effect ( -I effect) of chlorine atom decreases the electron density on O – H bond making the release of H+ ion easier. So the acidic nature increases with the increase in in –I effect of chlorine atom. Hence, chloroacetic acid is stronger acid than acetic acid.

Note : Position of electron withdrawing group also determines the acidic nature as the –I effect decreases with the increase in distance. Eg.

Q) Picric acid (2,4,6-trinitrophenol) liberates carbon dioxide from aqueous sodium bicarbonate but phenol does not, why?

Phenol is weakly acidic so it can not react with weakly basic sodium bicarbonate and hence does not liberate CO2.

But in picric acid, presence of three strong electron withdrawing nitro (-NO2) groups increase the acidic strength of phenolic group and make it sufficiently acidic to react with NaHCO3 and hence liberates CO2 gas.

Q. Arrange the following on increasing order of basicity and give reason.

3. To compare the stability of carbocation ( carbonium ion) :

When a covalent bond is formed between two atoms with different electronegativities, the highly electronegative atoms pulls the bonded pair of electrons closer to it. Thus one end of the bond is relatively negative and other end is positive. Such a bond is said to be a polar bond and a compound containing such bond is called polar compound. Eg.

1. Intramolecular H- bond : This type of bond is formed between hydrogen and other electronegative atom of same molecule. Eg.

2. Intermolecular H- bond : This type of bond is formed between different molecules of same or different compounds. Eg.

Q) Boiling point of haloalkanes is higher than alkanes but lower than alcohols of comparable molecular weight, why?

Haloalkanes have higher boiling point than alkanes of comparable molecular masses. This is because haloalkanes are polar in nature and due to their polarity , a strong dipole – dipole interaction exist between the molecules of haloalkanes.

In alcohols, Intermolecular hydrogen bonding exists between the molecules. H – bonding is more stronger than dipole-dipole interaction. Hence, boiling point of haloalkanes is lower than alcohols.

Q) n-butyl alcohol(b.pt. 1180C) has a much higher boiling point than its functional isomer diethyl ether (b.pt. 350C), yet both compounds show the same solubility ( 8g per 100gm) in water. How do you account for these facts?

Q) The boiling point of ether is lesser than that of corresponding alcohol. Give reason for this.

Hence, n- butyl alcohol has a much higher boiling point than its functional isomer diethyl ether.

But, both alcohol and ether can form intermolecular H- bond with water molecules. Hence, both compounds show the same solubility in water.

Complete transfer of a bonded pair of electrons (i.e. pair of Π – electrons) of a multiple bond to one of the bonded atom under the influence of attacking reagent is known as electromeric effect or E-effect. Eg.

This effect is also of two types i.e. +E effect and –E effect.

1. The effect is called +E effect if the electrons of the Π – bond are transferred to that atom to which the reagent gets finally attached. Eg.

2. The effect is called –E effect if the electrons of the Π – bond transferred to that atom other than the one to which the reagent gets finally attached. Eg.

According to these structures, there should be three single bonds having bond length 154 pm and three double bonds having bond length 134 pm between carbon atoms in the benzene molecule. But actually it has been found by X- ray diffraction studies that all the carbon-carbon bonds in benzene are equivalent and have bond length 139 pm , which is intermediate between C – C (154 pm) and C = C (134 pm). Thus, the actual structure of benzene is different from both ‘A’ and ‘B’ and is a resonance hybrid of these two resonating forms.

Q) What is hyperconjugation? Why it is also termed no-bond resonance?

It is a special type of resonance which involves the interaction or overlapping between a filled σ-bond orbital and empty p- orbital or Π – orbital of an adjacent carbon atom. Eg. 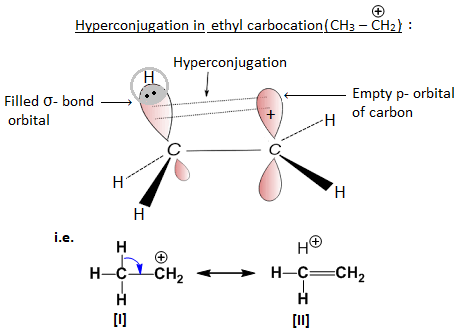 In the structure [II] there is no bond between H+ and C , so hyperconjugation is also termed as “ no-bond resonance”.

Q) How hyperconjugation explain the stability of carbonium ions ( carbocations) ?