Position of hydrogen in the periodic table 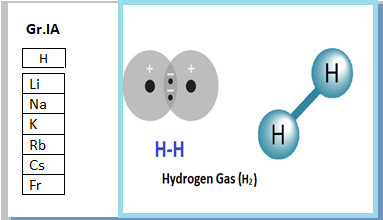 Ordinary hydrogen gas which consists of diatomic molecules in which two H atoms are combined together by a covalent bond is known as molecular hydrogen. Due to high H-H bond energy ( 104 KCalmol-1), molecules of hydrogen is very stable. It does not reacts under ordinary conditions.

(nascent=newly born) : The atomic hydrogen which is produced during the chemical reaction is called nascent hydrogen.

i. Reduction of potassium permanganate:

When molecular hydrogen gas is passed through acidified KMnO4, the pink colour of KMnO4 does not change.

But when a piece of zinc is treated with acidified KMnO4, it’s pink colour is discharged. This is because nascent hydrogen produced from the reaction between zinc and H2SO4 reduces KMnO4 into MnSO4 salt.

When molecular hydrogen gas is passed through acidified K2Cr2O7, the orange colour of K2Cr2O7 does not change.

But when a piece of zinc is treated with acidified K2Cr2O7, it’s orange colour changes to light green. This is because nascent hydrogen produced from the reaction between zinc and H2SO4 reduces K2Cr2O7 into Cr2(SO4)3 salt.

But when a piece of zinc is treated with acidified FeCl3, its colour changes to pale green.

Uses : It is used as reducing agent.

It is hydrogen atom formed by dissociation of molecular hydrogen at about 1000 to 2000oC at low pressure. {This can be done by passing hydrogen gas through an electric arcstruck between two tungsten electrodes}

It has very short half life time of 0.3 second. Thus it is unstable.

It is more powerful reducing agent than molecular hydrogen and nascent hydrogen. It can reduce oxides and chlorides of metals like copper, silver, mercury to metallic form.

i. It is used as reducing agent.

ii. It is used as atomic hydrogen torch for welding metals of very high melting point.

Differences between nascent and atomic hydrogen :

Adsorption of any gas on metal surface is known as occlusion. When molecular hydrogen is adsorbed on a metal surface (such as Fe, Au, Pt and Pd) , then this hydrogen is known as occluded hydrogen. In the powdered state, Pd can occlude approximately 1000 times its own volume of hydrogen. The occluded gas interacts with the metal to form a solid solution; or sometimes a part of the gas combines with the metal to yield other chemical compounds, for example, hydrides.

Differences between ortho and para hydrogen :

Isotopes are the atoms of the same element having same atomic number but different mass number. There are three isotopes of hydrogen:

Questions and their answers :

1. Which of the following is most reactive form of hydrogen?

3. Which of the following is known as heavy hydrogen?

4. Which of the following is known as radioactive hydrogen?

5. At room temperature, ordinary hydrogen is the mixture of ortho and para hydrogen in the ratio of :

6. When a piece of zinc is added to acidified potassium dichromate solution, the color changes to:

7. Least abundant isotope of hydrogen is:

8. The adsorption of hydrogen by metals is called:

Note : The adsorption of hydrogen by metals (such as Fe,Au,Pt and Pd) is called occlusion. In the powdered state, Pd can occlude approximately 1000 times its own volume of hydrogen.

Q) Give a reaction which shows that water contains hydrogen.

→ When steam is passed through red hot iron, hydrogen gas is obtained.

Since, iron does not contain hydrogen, it must come from water. This reaction shows that water contains hydrogen.

Q) When seam is passed through red hot coke, a mixture of two gases is obtained. Name the gases and write the reaction involved.

→ When steam is passed through red hot coke, a mixture of CO and H2 gas is obtained.

These gases CO and H2 together are called water gas.