On the basis of number of –COOH groups in their molecules carboxylic acids are classified as:

1. By the oxidation of primary alcohols and aldehydes:

Primary alcohols are easily oxidized first to aldehyde and then to carboxylic acids. Eg.

Carboxylic acids are obtained when 1,1,1-trihalides are hydrolysed in presence of strong alkalies like KOH. The unstable intermediate formed undergoes dehydration to give carboxylic acid. Eg.

When carbon dioxide gas is bubbled into the ethereal solution of Grignard reagent followed by subsequent hydrolysis with dilute acid then carboxylic acid is obtained.

5. From sodium alkoxides and carbonmonoxide:

When sodium alkoxide is heated with CO under pressure it gives sodium salt of carboxylic acid which upon subsequent acidification gives carboxylic acid. Eg.

Formic acid is prepared in the laboratory by the decarboxylation of oxalic acid with glycerol at 1100C.

7. Preparation of benzoic acid from the oxidation of alkyl benzene:

Benzoic acid can be obtained by oxidation of alkyl benzene with acidic KMnO4 and K2Cr2O7. During oxidation, side chain is oxidized to –COOH group irrespective of the length of the carbon chain. Eg.

1. Solubility: The first four carboxylic acids are soluble in water, the next two acids are slightly soluble. Acids having seven or more carbon atoms are insoluble in water. This is due to the fact that lower acids can form H-bond with water but with increased number of carbon atom the polarity of molecules decreases and it cannot form H-bond.

However, all carboxylic acids are soluble in less polar organic solvents such as ether, alcohol, etc.

(Q) The boiling point of methanoic acid is higher than ethanol though they have same molecular mass, explain.

The boiling point of carboxylic acids is much higher than those of alcohols of comparable molecular mass. This is due to the fact that acids form stronger intermolecular H-bond than alcohol as the O-H bond in acids is more polarized due to presence of adjacent electron withdrawing C=O group. It is also due to the fact that carboxylic acid can form a cyclic dimer by forming hydrogen bond between –COOH group.

Due to presence of polar O-H group, carboxylic acids ionize to give proton and hence behave as acids.

Both carboxylic acid as well as carboxylate anion are stabilized by resonance.

The resonating structures of carboxylic acid are:

The resonating structures of carboxylate anion are:

Effect of substituents on acidic strength of carboxylic acids:

Q) Why is chloroacetic acid stronger than acetic acid?

Negative inductive effect (- I effect) of electron withdrawing groups like halogens, – NO2, -CN, etc. decreases the electron density on O – H bond (group). It makes the release of H+ ion easier. Therefore, the acidic nature increases with the increase in – I effect. Hence, chloroacetic acid is stronger acid than acetic acid.

a. Reaction with metals:

b. Reaction with alkalies:

Carboxylic acids can neutralize alkalies like NaOH or KOH to form salt and water. Eg.

c. Reaction with carbonates and bicarbonates:

a. Reaction with alcohols ( Formation of ester) :

Carboxylic acids react with alcohols in the presence of conc. H2SO4 or dry HCl to form esters. This reaction is called esterification reaction. Eg.

b. Reaction with ammonia(Formation of amide) :

Carboxylic acids react with ammonia to form ammonium salt which on heating give amides. Eg.

Carboxylic acids on heating in the presence of dehydrating agent like P2O5 form acid anhydrides. Eg.

Carboxylic acids (except formic acid) reacts with chlorine or bromine in presence of red phosphorous to give α-chloro or α-bromo acids. The reaction does not stop at monosubstituted product but continues till all α-hydrogen atoms are replaced.

In formic acid molecule, the carboxylic acid group is attached to hydrogen atom (not to an alkyl group as in case of other higher members). As a result, it possesses dual functional groups i.e. carboxylic group as well as aldehyde group.

Hence, it behaves as an acid and an aldehyde.

1. Reactions due to carboxyl group: 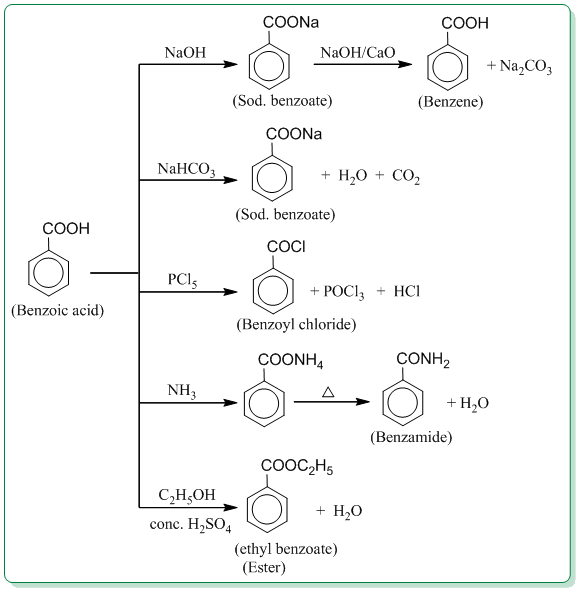 Reaction due to benzene ring: 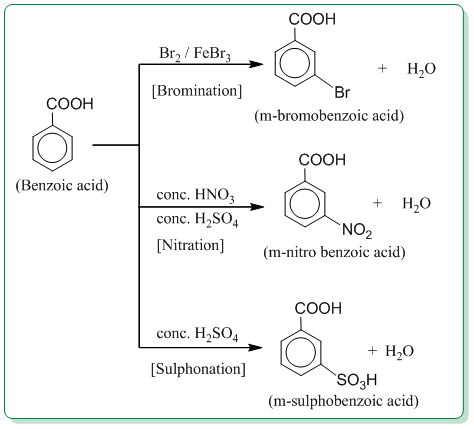 Q) Aqueous formic acid can not be dried by conc. H2SO4, P2O5 and solid KOH, why?

Aqueous formic acid can not be dried by conc. H2SO4, anhy.P2O5 and solid KOH because formic acid itself reacts with these compounds.

2. An organic compound ‘A’ on treatment with ethyl alcohol gives a carboxylic acid ‘B’ and a compound ‘C’. Hydrolysis of ‘C’ under acidic conditions gives ‘B’ and ‘D’. Oxidation of ‘D’ with KMnO4 also gives B. B upto heating with Ca(OH)2 gives ‘E’ (molecular formulae C3H6O). ‘E’ does not gives Tollen’s test and does not reduce Fehling solution , but forms a 2,4-dinitrophenyl hydrazone. Identify A,B,C,D and E with essential reacyions.

3. Compound A (C6H12O2) on reduction with LiAlH4 yielded two compounds B and C. The compound B on oxidation give D, which on treatment with aqueous alkali and subsequent heating furnished E. The latter, on catalytic hydrogenation gave C. The compound D was oxidized further to gave F, which was found to be a monobasic acid (mol.wt= 60). Deduce the structures of A,B,C,D and E.

6. An unknown ester C5H1202 was hydrolysed with water and acid to give carboxylic acid (A) and alcohol (B). Treatment of (B) with PBr3 gave an alkyl bromide (C). When (C) was treated with KCN, a product (D) was formed which on acid hydrolysis gave the carboxylic acid (A). Give the structure and name of the original ester. Identify (A), (B), (C) and (D) and write equations for the reactions involved.

7. An organic compound ‘P’ reduces Tollen’s reagent and on oxidation with potassium permanganate forms a compound ‘Q’ having the same number of carbon atoms as ‘P’. ‘Q’ reacts with aq. Na2CO3 to give carbondioxide. ‘Q’ on reaction with ethanol in the presence of sulphuric acid forms an ester having molecular formula C4H8O2 ‘R’. identify P, Q and R and also write their IUPAC names.

8. You are given two test tubes, one containing methanoic acid and other ethanoic acid. Suggest a suitable chemical test to identify them. Give chemical reaction too.

9. Methanoic acid is different from its higher member and it gives reactions of both an acid and an aldehyde group.

a. Write one peculiar behavior of methanoic acid.

10. There are carboxylic acid and ester as isomers of molecular formula C4H8O2.

a. Write the structural formula and IUPAC name of possible isomers of carboxylic acid and ester of given formula.

b. Which isomers produce CO2 from NaHCO3? Write the involved reaction.

c. Write an use of both types of isomers.

a. Write a test reaction of acetic acid.

c. How do you prepare acetic acid from- (i) sodium methoxide (ii) ethane nitrile (iii) chloroform

12. An alkene (A) with molecular formula (C7H14) on ozonolysis yields an aldehyde. The aldehyde is easily oxidized to an acid (B). When B is treated with bromine in presence of phosphorous it yields a compound (C) which on hydrolysis gives a hydroxyl acid (D). This acid can also be obtained from acetone by the reaction with hydrogen cyanide followed by hydrolysis. Identify A, B, C and D and write the chemical equations for the reactions involved.

13. Two isomeric compounds ‘A’ and ‘B’ have same molecular formula C3H5N. Predict the structure of A and B on the basis of following information:

b. On refluxing with dil.HCl, A gives C, and B gives D, C and D being the monobasic acids.

d. Write the reduction products of A and B.

14. Arrange the following compounds in order of their reactivity with reason:

How will you distinguish: