What are allotropes and allotropy?

Allotropes of carbon, sulphur and phosphorus are described below.

Diamond is the purest form of carbon. In diamond 1 carbon atom is bonded with 4 other carbon atoms by covalent bond forming tetrahedral structure. The bond angle between carbon atoms in diamond is found to be 109.50 and its bond length is 1.54 Å.

Note : Diamond is bad conductor because its electrons are not free to move due to the formation of sp3 hybrid covalent bonds between carbon atoms.

In graphite one atom is attached with other three carbon atoms by covalent bond which forms hexagonal ring. Out of four valence electrons only three valence electrons are used to form three covalent bonds leaving one electron free. This free electron per atoms is responsible for making graphite a good conductor. The hexagonal rings of graphite form a layer structure. The two adjacent layers of graphite are held with each other by Vander Waal’s force of attraction. Distance between two layers is 3.4 Å. The bond length between two carbon atoms is 1.42 Å and bond angle is 1200.

Note : Graphite can be converted into diamond at about 16000C and 50,000 to 60,000 atm pressure. Because of high cost and poor quality, diamond is seldom (rarely) made artificially.

It is latest discovered allotropic form of carbon (in 1985). The most common form of fullerene is C60. It is named as Buckminster fullerene after the name of Rechard Buckminster. It contains 60 carbon atoms arranged in hexagonal and pentagonal ring which forms spherical bucky ball or soccer like structure. So, C60 molecules are also called bucky balls. 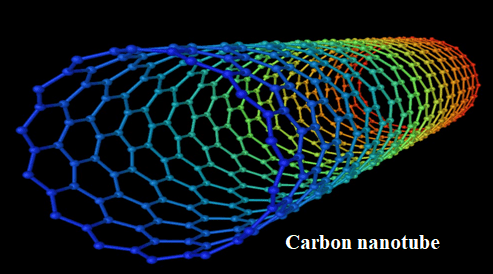 1. Coal : It is black or almost black solid combustible substance. It is naturally formed by the partial decomposition of wood or vegetable matter in presence of moisture at high pressure and temperature. It is used as fuel.

2. Coke : It is the residue of coal obtained after destructive distillation of coal. During this process volatile organic substances escape out. It is pure form of carbon, used as fuel as it burns without smoke. It is also used as a reducing agent in metallurgy.

3. Charcoal : It is porous form of carbon produced by the destructive distillation of organic materials like wood, sugar, bone, etc. Organic materials are heated strongly in limited supply of air. Charcoals are highly porous and used as adsorbent for absorbing toxic gases and purifying liquids.

4. Gas carbon : Gas carbon is dense form of deposited carbon on the interior part of gas retort during the manufacture of coal gas. It is good conductor of electricity and is used for making electrode in dry cell. 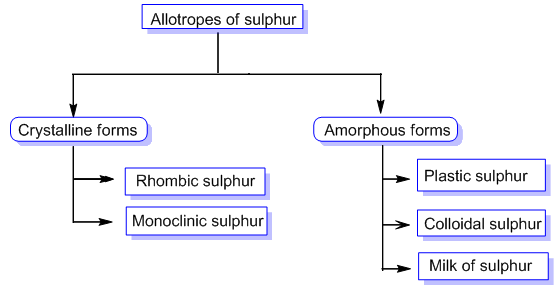 It is prepared by passing H2S gas to the solution of oxidizing agents like SO2, HNO3, KMnO4, K2Cr2O7, etc.

Among them white and red phosphorus are more common.

Phosphorus pentoxide in vapour form is reduced by coke and liberates phosphorus at 15000C.

Hence, it is stored under water.

Oxygen – Types of oxides and Uses of hydrogen peroxide.